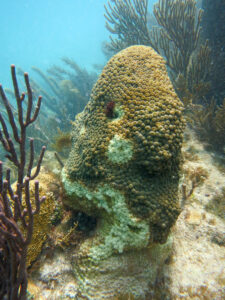 Florida’s coral reefs are currently experiencing a multi-year disease-related mortality event that has resulted in massive die-offs in multiple coral species. The novel coral disease which has been termed Stony Coral Tissue Loss Disease (SCTLD) has spread insidiously through the Caribbean including over 96,000 acres of the Florida Reef Tract (FRT). First observed offshore of Miami in late 2014, the disease has since spread to the northernmost extent of the FRT and south into the Lower Florida Keys, killing many corals along the way. The best available information indicates that the disease front is located near Rebecca Shoal, between the Marquesas Islands and the Dry Tortugas National Park. SCTLD has been documented in over 20 of Florida’s approximately 45 species of reef-building corals, and has a high rate of disease transmission and tissue loss that often results in whole colony mortality. This project was designed to “rescue” healthy corals ahead of the SCTLD boundary and place them in aquariums and research facilities to prevent them from becoming infected, to preserve genetic diversity, and to serve as source stock for propagation for future restoration activities. Rescuing coral species that are highly susceptible to SCTLD is a main goal of this project. Many of these coral species have never been collected or held in captivity before, therefore researchers will expand their knowledge of coral husbandry and propagation of fragmented or sexually reproduced second generation corals.

In July 2018, a coral disease workshop was hosted by SCTLD response partners, including the National Oceanic and Atmospheric Administration, Florida Department of Environmental Protection, Florida Keys National Marine Sanctuary, and FWRI, to develop a response plan for the ongoing coral disease outbreak in Florida, with a focus on identifying an intervention action plan to help slow the continued spread of disease and save priority corals. A primary intervention recommendation from that workshop was to collect healthy corals ahead of the disease boundary and place them in land-based holding facilities to prevent them from becoming infected. As many of the susceptible coral species are rare and even listed as threatened by the Endangered Species Act, such collections would also preserve the genetic diversity of each species and serve as a source stock for reproduction and propagation for future restoration activities when appropriate. A multi-agency, multi-disciplinary team was assembled to develop and execute this recommendation (i.e., the Coral Rescue Team), and the Coral Rescue Project was born.

During this project, researchers have conducted day trips in the Lower Keys resulting in eight collections trips where 395 coral colonies were collected, and seven coral collection cruises upon a liveaboard vessel where 1,817 coral colonies were collected in the Marquesas and Dry Tortugas. Biologists have collected from 70 unique sites throughout the Florida Reef Tract, and we have collected 19 different coral species. Currently, 1,989 rescue corals are being held between 21 facilities, including 18 Association of Zoos and Aquariums (AZA) accredited facilities, across 13 different states. Researchers have plans to send rescue corals to 4 new facilities coming onboard soon.

The Coral Rescue Project is the largest coral rescue missions to date. Biologists hope to learn a lot about coral husbandry for these species that have never been held in captivity. Displays at the AZA facilities will serve as great tools to teach the public about the Florida Reef Tract, corals and coral disease. Researchers and biologists will have the ability to study these coral species up close and learn about different species being held in land-based aquaria. During this project, researchers have already learned so much about preferred holding parameters, troubleshooting and treating coral health issues, propagation, and reproduction modes of the rescue corals. When outplanting these corals in the future, biologists will learn priceless information about the novel restoration of these coral species post-disease.

Future work to complete includes collecting samples to address genetic deficiencies and collecting high and medium priority corals from endemic areas. Genetic markers are being developed from samples collected from each rescue coral in order to genotype and understand the genetic population structure of rescue species. Such information will prove invaluable to restoration efforts in the future. Researchers plan to continue learning about propagation through sexual reproduction. Researchers propose expanding Florida care facilities to house corals returned from longer-term facilities, future collections of endemic corals, and second-generation corals. Long-range plans include building new propagation facilities or expanding existing facilities with the capability and capacity to fragment and propagate existing corals or to induce existing corals to spawn. In addition to the increased stock created by fragmentation, sexual reproduction through induced spawning will increase the genetic diversity and potential resilience of future generations. To date, 10 of the 19 rescue species have spawned in captivity, some through induced spawning where researchers have mimicked temperature and light cycles in the wild to promote reproduction at a specific time. Biologists will select and build out new Florida field nurseries to house corals in preparation for outplanting.

Once the Coral Rescue Project is completed, researchers will monitor and survey a percentage of the outplanted corals for quite some time – coral health and prevention of disease will be the focus moving forward. Countless organizations and natural resource managers will benefit from the results of this project. Learning more about coral husbandry, propagation through sexual reproduction, and outplanting after a large disease event will have immense management implications and serve to inform future projects and research not just in the Florida Reef Tract, but around the planet. This Coral Rescue Project is the first of its kind and will serve as a guide for future rescue missions.