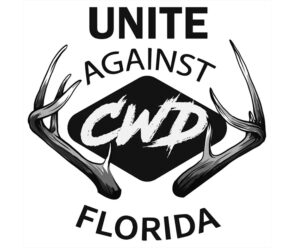 Chronic Wasting Disease (CWD) is the most severe and costly threat to white-tailed deer populations in North America. CWD is a contagious disease of the nervous system that is always fatal to deer, elk, moose, and caribou. The disease is caused by a prion, or misfolded protein, which can persist in the environment for years or decades. The prion is not destroyed by UV irradiation of the sun, is resistant to freezing, and can withstand temperatures of over 1600° F, lasting in the environment through prescribed burns. No vaccine exists to prevent CWD, and seasonal or environmental shifts do not reduce or eliminate the threat of disease. With so many perpetuating factors, prevention remains the best way to mitigate the disease.

Though CWD has not yet been detected in Florida, the Association of Fish and Wildlife Agencies (AFWA) has developed a concise set of best management practices (BMPs) for the prevention, surveillance, and management of the disease, including practices for CWD-negative states. More resources allow for BMPs to be implemented, resulting in better surveillance and preparation for CWD detection. Using these practices, FWC may detect and manage the disease before it damages the ecosystem irrevocably.

With guidance from the Cornell Wildlife Health Laboratory (CWHL), the FWC Wildlife Health team will survey members of the white-tailed deer community such as taxidermists, meat processors, and captive cervid owners to better understand CWD risk in Florida. The results of this survey will be used in a model with other data such as deer demography (how big the deer population is in each county), historical surveillance (where we have looked for CWD in deer in the past without finding it), and laws for white-tailed deer importation in nearby states. The outputs of this model will allow our agency to determine where CWD is most likely to be introduced into Florida. This targeted approach reduces resource needs by focusing on finding and controlling the disease in its early stages instead of taking a 'needle in a haystack’ approach.

USDA APHIS Wildlife Services recently awarded the Wildlife Health Team $101,646 through a cooperative agreement for this project. This funding supplements funding from the Division of Hunting and Game Management that has supported our CWD surveillance efforts since 2002. Funding has also been provided for CWD surveillance through the State Game Trust Fund and Conserve Wildlife Tag and Deer Tag grants.

This is just the beginning this important project, with the risk assessment and modeling portions in the very early stages. The vital work being completed by this team will lead to better information for the prevention of this deadly disease in Florida white-tailed deer.