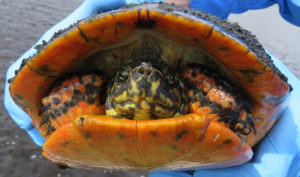 In a state that is well-known for its bountiful marine life – sea turtles, coral reefs, sharks, etc. – less known wildlife can sometimes go unnoticed by the majority of the public. Softshell turtles may not be on as many tourists’ t-shirts as bottlenose dolphins, but the turtles are just as important from a conservation perspective. In March 2018, the Florida Fish and Wildlife Conservation Commission's Wildlife Health Group learned of a freshwater turtle mortality event in the St. Johns River watershed near the Tosohatchee Wildlife Management Area. After investigation, researchers determined that the turtle mortalities are linked to infection with a novel virus. The current research was designed with three main goals. The first goal is to provide funding for the development of an advanced laboratory diagnostic assay that will aid researchers in their understanding of virus distribution across different turtle host tissues and species. The second goal is to further document the geographic extent of the virus across Florida’s landscape via continued morbidity and mortality investigations. The final goal is to seasonally assess potential virus shedding by apparently healthy softshell turtles trapped in an area where turtle carcasses previously tested positive for the virus. Trapped turtles are released at site of capture after samples have been collected.

The species being studied are the Florida softshell turtle, the peninsula cooter, the Florida red-bellied cooter, and other species as indicated by the research findings.

Researchers are using several methods to collect year-round data on the geographic distribution of sick and dead turtles potentially affected by the virus. Citizen reporting is an essential tool that helps researchers to map new mortality locations. Communication with wildlife rehabilitation centers that receive sick turtles is another valuable method to obtain information.

This research is being conducted by FWC employees within the Research Institute's Wildlife Health and Reptile and Amphibians groups, as well as with the Tosohatchee Wildlife Management Area. Key partners also include the National Oceanic and Atmospheric Administration’s Division of Fisheries and the University of Florida College of Veterinary Medicine. Other states and researchers may find the results of this study useful in the event that they encounter similar turtle mortality events.

This project is funded in part by a grant from the nonprofit Fish and Wildlife Foundation of Florida via proceeds from the ‘Conserve Wildlife’ license plate. Since its founding, the Foundation has raised and given away more than $34 million for conservation, outdoor recreation, and youth programs and camps. For more information, please visit www.wildlifeflorida.org or call 813-358-8058. Supplemented assistance was provided by the State Game Trust Funds through the Wildlife Health Group’s budget. Please report sightings of sick or dead turtles to the FWC by calling 352-339-8597 or through the FWC Reporter app.