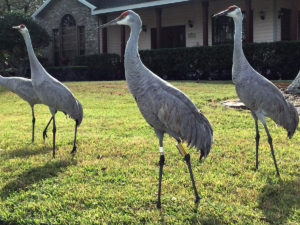 The Florida sandhill crane (Antigone canadensis pratensis) is a familiar sight for residents and visitors alike to areas of Florida, but unfortunately, they are becoming less familiar. Faced with substantial population decline due to habitat loss, Florida sandhill cranes have also experienced long periods of drought and degradation of remaining habitat, which has all contributed to their decline. This study will compare adult crane habitat use, survival, and reproduction between suburban and conservation areas, with an emphasis on identifying specific causes of mortality. Additionally, researchers will also determine vegetation associations used by cranes in suburban habitats and conservation areas from movement data.

Non-migratory sandhill cranes were once widely distributed across the southeast and into the Caribbean, however, the species was extirpated from most of its natural range by the early 1900s. Conversion of prairie to agriculture or development, draining of wetlands, and overhunting were and are the main factors threatening sandhill cranes. Spatial models suggest the total available Florida sandhill crane habitat declined 42% between 1974 and 2003. The Florida sandhill crane is currently listed as State Threatened and as a Species of Greatest Conservation Need in the state’s Wildlife Action Plan.

Florida sandhill cranes inhabit open areas, typically prairie and pastureland in the uplands and shallow marshes with emergent vegetation in wetland areas. Most preferred Florida sandhill crane habitat is privately owned and can be lost through development at any time. As the amount of preferred habitat has declined, an increasing number of Florida sandhill cranes have inhabited suburban and urban areas, such as airports, residential subdivisions and golf courses. Cranes in these areas may face additional challenges compared to birds in natural areas. For example, cranes require water levels sufficient to protect nests and themselves from terrestrial predators but low enough to prevent nests and roosts from flooding. In suburban areas, cranes often use man-made ponds or water retention areas that can receive large amounts of water run-off from developed sites (e.g., highways, lawns, golf courses and buildings) resulting in rapid increases in water levels that cause nest failure or leave the areas too deep to be utilized. Other threats to suburban cranes include domestic pets, automobile traffic, fences, human disturbance and environmental contaminants. This project was developed to assess threats to the survival and productivity of Florida sandhill cranes in suburban areas compared to the same parameters for conservation areas.

To capture cranes, Florida Fish and Wildlife Research Institute researchers survey areas for cranes then learn their routine or bait the area if necessary. Researchers then capture the cranes using a hand-held net gun, ground snares or by simple hand grabbing. After capture, cranes are radio-tagged and color-banded, which is helpful for researchers for visual and radio monitoring after release. Cranes are captured and marked from April through October, before the arrival of migratory sandhill cranes that overwinter in Florida. Currently, FWRI has cranes marked from Marion County in the north to Highlands County in the south, Pasco County in the west and to Indian River County in the east.

This project seeks to fill important gaps in our understanding of Florida sandhill crane ecology identified in the Florida Sandhill Crane Species Action Plan. Causes of population decline are not well understood, so this project will benefit cranes by providing habitat use, survival, and productivity data for unstudied habitats (e.g., conservation areas and urban/suburban habitats) needed for development and implementation of management and conservation recommendations.

About halfway complete, this project has radio-tagged their target sample size (n=17) of suburban cranes, and 15 of 17 conservation land birds. Researchers have color-banded 49 cranes, out of a goal of 100+ before the project ends, which is set for June 30, 2021. Data generated from this project will be used to develop conservation recommendations and initiate plans to conserve Florida sandhill cranes. Future research may involve tagging young-of-the-year cranes in suburban and conservation areas to compare survival and movements of these birds to those from past studies of similar aged cranes on improved pastureland.

Key partners for this project include the State Wildlife Grants, the Bernard Lewis Charitable Foundation, Florida State Forest Service, Florida State Parks, Lake County Parks and Trails, Orlando Wetlands Park and St. John’s River Water Management District. FWRI researchers could not have initiated, nor can they complete this project, without the assistance of these partners.